Last week I just bought some books. And Im gonna give you a little opinion about one book; 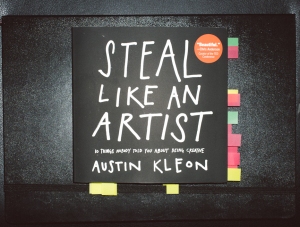 Well, to be honest the first reason I bought it because of the title. It totally sold me out!!. Like, what kind of artist? who is the artist? and stealing. Really stealing?? what would they steal ?. After I read the book for almost 5 days :p , I clear as crystal. Eventhough, some part are still stucked in my head need a real example to be sure. But I think this book is kind a push or injection for you to make a movement, which is make something or to be creative in your life.

FYI, I really hate a motivational book. Actually I hate everything about motivational kinda thing. I personally think that motivation doesnt have to be told by someone else that I dont even know. In my perception some motivator talks like have no soul about they “motivational speech”, like they have been repeating all the stuff and sometimes they are patronizing and annoying (my personal experience.).

But I do find this book is someway different. I feel this book is such a refreshing reading and (maybe) help you motivated. The author, Austin kleon make this book as an advice by himself to previous version of himself. His theory is “When people give you advice, they really talking to themself in the past”. And thats what he actually did. So its kinda autobiography book about his creativity and his youth.

And here some quotes or ideas that I really like ;

” Everything that needs to be said has already been said. But, since no one was listening, everything must be said again” – Andre Gide

The point is, NOTHING IS ORIGINAL. Every new thing or new idea is just mashed up of one or more previous idea OR an old idea in a new dress. That mean that creativity is never just coming out from nothing. Every artist will always have muse or influence to look up to.

” We are shaped and fashioned by what we love ” – Goethe.

Ok, the easiest example is “you”. You are the summary of what you like or what you feel inspired by. And a quotes from Jay-Z will give you a clear meaning,

“We were kids without fathers… so we found our fathers on wax and on the streets and in history. We got to pick and choose the ancestors who would inspire the world we were going to make for ourselves” – Jay-Z.

See? you are the fussion of certain interests in everything that lives around you. Austion Kleon mention that we are the real example, we are a remix of both our parents and all of your ancestor genes. And this makes the formula 1+1=3 is really makes sense!

And what Austin means with “steal” is that you should have something/someone that inspired you and make they influences as a your own creativity. And all of sudden all this thing do affect your personality.

I love this last quote!! Anyway what you should stealing is the influence or that interests from something or someone that really inspired you. After that, make something then someone will steal it from you. See the pattern?? its like an endless cyclus.  And how to start it?  BE CURIOUS. (Start finding what and who is your muse).

This is my own resume from the book. Oh, I didnt meant to make motivator look so bad, it just I think Fidel Castro do speech on youtube is better than a motivator on TV. If you know Fidel Castro, then you will know what I mean 🙂

**The picture is not mine, from google. All the quotes, from Austin Kleon book “Steal like an artist”.**